'A Night Under the Stars'

Seneca Valley students will enjoy a night under the stars for their prom – literally.

To comply with COVID-19 guidelines prom-goers at Seneca Valley are taking their event outdoors to maintain social distancing. The venue will be held on Seneca Valley School District’s secondary campus in Jackson Township on Saturday, May 15.

The 2021 theme “A Night Under the Stars” includes colors of gold, black and white; with food, tents and entertainment in the lower parking lot and NexTier Stadium from 6-9:30 p.m. The event will conclude with fireworks.

Grand March will begin at 6 p.m., in the senior high school auditorium which will be livestreamed for the community to watch from home.

Seneca Valley’s prom king and queen will be announced during the prom.

*Individual prom court photos were taken outdoors while physically distanced from other students and photographer. 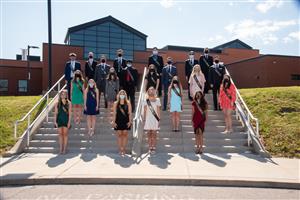