2020 was certainly a memorable year, but for one Seneca Valley Academy of Choice student, 2020 was the year when he was a part of a cinematic account of a single day on Earth. 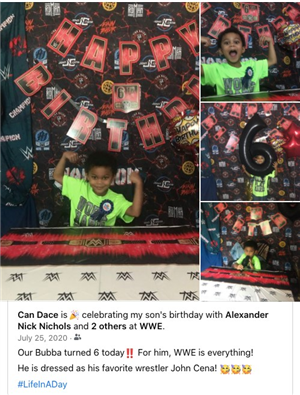 Back in July, Crispin celebrated his sixth birthday with a WWE party via Zoom.  Afterward, his mom Candance went to YouTube to upload the video and saw an ad for a film called "Life in a Day 2020." She decided to submit Crispin’s footage and it was included in the film (at the 32:28-minute time stamp)!

According to YouTube, the creators asked for people all over the world to film their lives on July 25, 2020 and share their stories to be part of a documentary. When all the submissions were tallied, the filmmakers had received over 300,000 videos from 192 countries. The result is a stirring film about love, death, heartbreak and hope that looks beyond geography and circumstance to explore what connects us as humans. It was directed by Academy Award® winner Kevin Macdonald, produced by legendary filmmaker Ridley Scott and filmed by you.

The film premiered at the 2021 Sundance Film Festival on Feb. 1 and is now available for free for everyone on YouTube.